One Rock At A Time 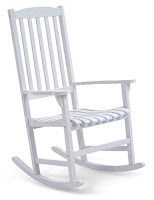 So, here I sit. So incredibly grateful for the rocking chair. The white one that was sitting in our garage for several years after we moved Mayce and Bryce to older rooms, and thought we had no need for it. The one that was so simple and so unimportant....so I thought....until Blake hit "the phase." And when I type, phase, I mean "angry, frustrated, clingy, disobedient, sad" phase. We had only been in the new house 6 months, our 4th precious baby was here, and taking some new attention, and life as he knew it was upside down. Not to mention the fact that I was now homeschooling two, and needing some specific time in the day to do so. He was sad, he was almost 2 and he was NOT having it. We found that bedtime began to be hard on him, and he quickly shifted from laying down quietly, to crying for several minutes. These were Blake's hardships......now for mine. 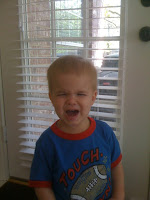 I was now a mother of 4, six and under. I was recovering from delivery, settling into/keeping a home triple the size of our other, homeschooling a 5 and 6 year old, shifting with my hubby as he transitioned in his job, all the while, realizing that days at home were now the norm, and going out was now quite difficult. I found solace and comfort in the sweet, short, time I had with my Father before my kids woke up, and I put all I had into making each day enjoyable, purposeful and disciplined. Then...Blake hit his phase, and I hit a new phase of tired! Brayden was 4 months old, and we could just not pinpoint why this was so difficult for him. After much prayer, I walked out to the garage one day, and felt two words pound in my heart..."rocking chair." "God" I said, "he's too old for that!" His response "it's not just for him....it's for you too."

Needless to say, that caught me off guard. But, you better believe I ripped that chair out of the garage that second and cleaned it up! We moved it to his room, and began reading his bible story in the chair, then rocking and singing love songs to him for about 15 minutes. As I would sit there with Blake snuggled on my chest, I was overwhelmed with emotion. It literally seemed that each rock of that chair brought healing. It was like we were both being mended in our heart with every single squeaky motion. As I would sing/worship and whisper every phrase I could think of to tell Blake how much I loved him, my Father would literally do the same thing to me. It produced the most incredibly intimate moments.....every single day, every single rock.


One day, while rocking, I began to thank the Lord for this "simple" solution to such a difficult phase. He began to flood my heart with this incredible concept of healing one step, or rock, at a time. See, it's often the simplicity of His plan that is so impactful for His glory. He could have given David supernatural strength, but instead he gave a stone. He could have given Moses a fleet of angels to whisk the Israelites away, but instead he gave him a staff and an interpreter. He could have given the world a mind-blowing heavenly entrance of the King, but instead he gave us a precious baby in a humble environment. This mommy business is not easy, and I will never claim it to be, but I certainly know that if our focus on His perspective is lost for one second.....if our eyes leave the Master and glance at the storm of our circumstance.....we will begin to sink faster than we can imagine. Just like Peter, we too can get weary, afraid and overwhelmed (understandably) and begin to lose sight of Who is guiding our faith walk. The story is not in our weakness, though, but rather in His beautiful redemption.....which He freely gives without hesitation!

I called out, and He answered.....in the form of a chair. Never would have imagined this white hunk of wood to bring so much peace and mending to our hearts......but the Rock of Ages knows exactly how powerful one rock with Him will be, and for that, I am eternally grateful!

Stacy, what an encouragement this is to hear. I love how the Lord showed you the rocking chair and what a sweet glimpse of God's ways you described. Loved your post! Also, it is encouraging to hear the stages you are going through with your four, as they are so similar to mine. new house, new child, start "homeschool", Canon newly turned two...needing more attention and the pouting and aggressive behavior begins. We have noticed that it does really help to have one on one time with his as well, but this is a great reminder to do it more often, in a particular place, away from others (that's the really hard part). Thank you again for your sweet encouraging words, you have a gift!

I LOVE IT!!! You know, you really need to teach a class or write a book or something:) So serious!!! I NEED you to share your wisdom! love you friend.

Stacy, we are rockers in our house. I adore this time with my boys. Your post is so sweet and encouraging. Brought big tears to my eyes. Thank you for sharing your beautiful, honest story.

Stacy, You are an amazing young woman, a great wife and a stellar mom. You take me back to places I've walked through and remind me to not go too fast even today. Thanking God for his direction, revelation and healing in your life. He is so good. You are loved.

Hey Durhams-- You're in Euless, we're in Grand Prairie... just a hop, skip, and jump away. Want to do dinner soon? We could meet up for a picnic, the weather is so lovely. :)

Hey Durhams-- You're in Euless, we're in Grand Prairie... just a hop, skip, and jump away. Want to do dinner soon? We could meet up for a picnic, the weather is so lovely. :)

I LOVE IT!!! You know. Online casino games played through a high security system.

you can play the whole casino, bet easy through the 24 hour service, then login to the gambling system by entering the page in the button above, then enter the account name and password. How to Apply for Online Casino Games Website is considered to be the best online gambling site of this era. It's easy to access, it's easy to play, and it's a great place to have more than 200 kinds of betting games. The online gambling is more exciting than anyone else. สล็อต Six clubs are interested in doing it.

Hi, very good article thanks for sharing keep up the good work!


Hi,Very interesting post.this is my first time visit here. I found so many interesting stuff in your blog especially its discussion..thanks for the post!

Nice post. You covered a lot of points in your post . Thanks For sharing this with us.


I have read your article, it is very informative and helpful for me.I admire the valuable information you offer in your articles. Thanks for posting it.